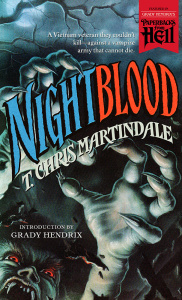 Descirption: As a soldier in the jungle of Vietnam, Chris Stiles learned how to fight against a deadly enemy. Now the war is over, but when his brother is slaughtered in Central Park, Chris finds himself called back into action, this time to battle a different kind of foe: an army of the undead!  His quest for the creature that killed his brother brings him to Isherwood, Indiana, home to 800 people-and one ancient vampire. As all hell breaks loose and the townspeople are turned one by one into blood-sucking monsters, will Chris’s tactical skills and his arsenal of automatic weapons be enough to stop the vampire menace?  This first-ever reprint of T. Chris Martindale’s action-packed vampire romp Nightblood (1990) includes a new introduction by Grady Hendrix (Paperbacks from Hell) and the original cover painting by Greg Winters.